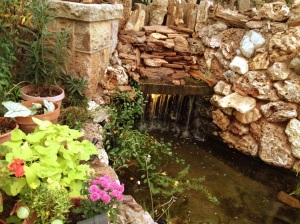 Sixteen years ago, our two boys, Brandon and Brett, their cousin, Barrie Kay, and friend, Justin Hill, spent a majority of their summer digging out my Grandfather, Hart Shoemaker’s (Dano’s)  fish pond, which had previously been turned into a flower bed.  The stories vary, as to the reason for Dano’s transformation of the pond, including fear of small grandchildren falling into the pond and/or problems with cats, coons, etc. eating the fish.   The re-creation of Dano’s vision for a waterfall and fish pond in front of his beautiful rock garden wall, became a family quest, of sorts–a definite labor of love.   Whether or not Dano ever accomplished creating  a successful waterfall  is also a source of historical contention.  However, our family  discovery of a path  through the rocks obviously intended for placement of a water hose above the rock ledge, and our later attachment of  a pump to the hose, resulted in great excitement at the sight and sound of  a small trickling waterfall.  As to fish, we started out with Fanny and the six Bait boys (Fanny being a triple tail beauty from the local pet store and the bait boys picked up at the local bait shop).  We gradually added several plants, with help from our friend, Mary Fair, including lilies, an umbrella plant and Worm Wort.   Mary gave us a beautiful, large salmon Lilly called a “Colorado”.  Fanny and the bait boys (yielding 150 fish) lasted for fifteen years, along with our Colorado Lilly.  Visitors to our Riverside oasis included many colorful dragonflies, and tiny frogs looking for mates, very loudly. Sadly, this year, 2013, we lost all of our fish, due to several years of bad drought, my poor attempts to clear up the water, and a later discovered water leak out the back of the waterfall.

Following a great deal of searching  and a phone call to friend, Bobby Deagan, we discovered an organic pond expert, Amy Herndon, with a shop near Lake Fort Phantom, called “Natural Waterscapes”.    Amy is an amazingly talented artist of ponds, with extremely strong natural intelligence (reference to Howard Gardner’s work).  Amy worked the entire week using a bucket to empty the pond completely, digging out about two feet of sludge. She took great care in sifting through the sludge to preserve any rocks or artifacts that had fallen into the pond during our seven years of enjoying it.  Amy unearthed a variety of treasure items, including  a possum skeleton, the lid to one of my favorite pottery lanterns, pieces of crystal that had fallen from Dano’s large crystal rocks, several pieces of petrified wood, old parts of pots, and a few cinder blocks used to balance plants.  When Amy unearthed the original drain, she discovered that calking applied around it by our boys, was peeling off in sections, which could have contributed to the demise of our fish.   Amy is extremely creative at solving problems and fearing leakage around the drain, she cleaned around it and applied a special fish-safe form of  black silicone around it.  Noting some writing on top of the old drain, Amy and BG were attempting  to make the writing be the date of construction of the house.  However, when I, Terry, came outside to look and give my opinion,  I recognized the writing as:  3bt (a code our family uses for 3 b’s-Billy, Brandon and Brett, and T-Terry) and BK (cousin Barrie Kay’s initials).  Alas, Dano’s first pond renovation crew goes down in history forever!!

As I took this opportunity to examine the beautiful rock cave formed beneath the rock ledge of the waterfall, I discovered that beneath the dark, crusted layer of black calcification formed on all the rocks, were glorious shiny crystals.  I spent one entire day in the scorching, Texas sun, sitting on a stool down in the pond, in front of the waterfall, using a Q-tip and watered-down vinegar to hand-scrape off the layer of calcification on each crystal rock.  I felt so connected with Dano, as I uncovered his beautiful work, with my scraping resulting in the gorgeous luminescent glow of the crystals.  The experience was “far better than panning for gold”.  When Amy arrived later that day, though she appreciated my being sentimental, she informed me that the crystals would become re-covered with calcification  and suggested we move on to another task.  Amy appeared  quite impressed with the planning, work and care that Dano put into designing the rock garden and pond.  It was very important to Amy and us, that we preserve Dano’s original work, in spite of the leak off the back of the waterfall.  Amy came up with a creative idea of covering the original rocks with a heavy liner and using Dano’s numerous pieces of petrified wood to build the waterfall out on the same ledge.  Amy insisted on us hand-scrubbing each piece of petrified wood used on the waterfall, and we selected the most unusual and beautiful to grace positions on the front of it.  Amy spent hours, placing each piece of wood in the perfect spot to create mini-waterfalls culminating in a semi-heavy downpour off of the ledge.  Her work on the waterfall is simply beautiful and we can’t help but think of Dano standing tall with his quiet, and very pleased hint of a smile.  After finishing the waterfall descent, Amy worked and worked to figure out the original placement of one of Dano’s largest rocks at the top of the waterfall.  Eventually, Amy discovered its connection to the left pillar and positioned it in exactly the place Dano intended over 70 years ago.  Amy set aside several other  large pieces of original rock for positioning later at the pinnacle of the waterfall.  Her plan for the waterfall later includes foaming between the original rocks and petrified wood to maintain placement of the rock waterfall formation.  Amy’s plan also includes covering her self-built eco-filter system behind the waterfall with the more pieces of petrified wood she dug up in order to balance the eco-system on the ground.  Amy had ordered us a new pond pump from Canada (a great improvement over our previously used small pumps) so we wouldn’t have to purchase a new pump every Spring following a freeze. So, her next task was to install  the new pump  on the right side of the pond, guaranteeing clear water, always!

Amy’s second stage of pond restoration involved filling the pond with water.  While sharing a bottle of wine, BG and Amy held long discussions about the benefits or detriments to our fish and plants of using our well water versus city water.  Amy tested both water samples in order  to convince BG of the advantages of using city water with an added de-chlorinizing product called Vanish.  BG was not pleased about the decision, but once he exited to the house, Amy and I proceeded in filling the pond with city water.

Amy’s third stage of restoring Dano’s pond  included careful bare-root placement of approximately twenty species of plants around the edges of the pond. Once again, when finished, Amy’s meticulous artistry painted a glorious picture across the surface of the pond.  Amy chooses to bare-root the plants, so they will get nutrients from fish waste, and not soil.  Water irises (variegated and non-variegated), Penny Wort, Bluebells, Parrot Feather, Primrose, Christmas Tinsel, Worm Wart, a deep purple Tropical Water Lilly, our previous large salmon Colorado Water Lilly, Mint, and Wisteria now partially adorn the gentle movement of water on the pond’s surface.

Finally, we moved on to the fourth and much-anticipated stage of acclimatizing and softly introducing eleven baby koi to the water , which Amy and I hand-picked out of a huge basin at her shop.  Each fish is unique in color, including butterfly and regular koi.  When first introduced to the water, the koi gathered as one cohesive group, slowly moving around the bottom of the pond, exploring their new environment.  Amy and I sat for hours watching their movements.  Eventually, they formed a single-file parade across the back edge of the pond, back and forth between the waterfall and behind the pump. Amy recommends a daily diet of oranges, to brighten the detailed coloring of the koi.

Working on the pond with Amy was truly a journey of dedication and love to Dano, our rock artist.  Dano envisioned  endless beauty–a rock garden and pond designed by him and  lasting across time, for his children and grandchildren and friends to enjoy.

My Tweets
© Terry Grosvenor and Child of the Rock Garden, 2013.

Unauthorized use and/or duplication of this material without express and written permission from this blog’s author and/or owner is strictly prohibited.

Excerpts and links may be used, provided that full and clear credit is given to Terry Grosvenor and Child of the Rock Garden with appropriate and specific direction to the original content.